Well, it's broken down for now (the Mustang that is) 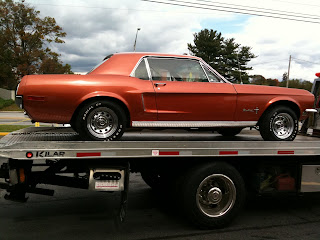 This past weekend I went up the Hershey AACA car show in Hershey, PA.  In my Mustang...

......and got to Lancaster, PA. Car died at a Gas station and wouldn't restart.

Had it towed to Pep Boys (hey, it's Lancaster) and wound up troubleshooting most of the car myself. They eventually just gave me their multimeter and equipment and I started diagnosing.  After they tested the battery, there were three guys standing there looking at the engine with their hands on their hips and I said: "So what's the deal guys?"

Their response: "I have no idea".  So I basically wound up trying to fix it myself, at Pep Boys.

Replaced the Starting Solenoid and cable to starter, that wasn't it.

Basically when you turn the key, the (starter?) clicks one time and the car doesn't start. All you get is an audible "click" and that's it. (Yes, the battery is good)

We pulled and bench tested the starter, and the guys there said it bench tested fine. So, not sure what to make of it at this point.

I don't think the engine's frozen, because I can do things like, put the car in reverse and walk up to the front of the car and turn the fan blade and the car will move backwards. (meaning I can turn the camshaft, meaning the pistons are moving, meaning not frozen?)

So, Saturday morning I had it towed up to a custom Mustang shop in Harrisburg. They were taking a look at it.

Nothing worse than parking your RENTAL car at a car show, walking across the street to the car show, and YOUR car goes by on the flatbed and everyone stops in the middle of the crosswalk to take a picture.

So, enjoy a picture of my car on the flatbed. (being hauled away from Pep Boys :)